Posted on November 30, 2013 by Daniel Aston
Comments off

The Zizzi Ristorante in Falmouth is fast becoming one of my favourite places to eat. Located next to the National Maritime Museum, it overlooks the harbour, creating some stellar picturesque window views from within the restaurant. Whilst not the only Italian in town with Pizza Express on its toes right next door, the international pizza chain falls far short in comparison. The real competition is a couple of doors down with Rick Stein’s Fish and Seafood Bar. Albeit offering a different culinary experience, it’s certainly a strong candidate for your evening meal and I must confess that my first experience at Zizzi’s was very much by default. I had initially intended to visit Rick Stein’s and arrived only to find it closed!

Inside the restaurant is spacious, fresh and a lot larger than outside would have you imagine. One of the advantages of going out in November and out of season is that everywhere is generally quiet and there are plenty of tables to choose from, not to mention a peaceful and relaxing atmosphere. The staff are very efficient and personable and you’re not left hanging around awkwardly upon entering. Given the choice it can be hard to decide where to sit with comfortable ring sofas on one side and intimate high tables by the windows on the other. Either way, with a candle-lit table beside the sea it’s now only down to the food to seal the deal for a perfect all-round package.

I have been three times over the past month and only on my third visit did I actually succeed in ordering a pizza! It sounds bizarre but for some reason the menu has proven itself to be a little misleading on my part. There are slim pizzas listed side by side with salads and calzone pizzas with rustic pizzas. Admittedly, my misreading of the menu may partly at least be down to my own personal incompetence and perhaps I shouldn’t have been too surprised to see a roasted duck salad appear from the kitchen instead of duck pizza during my first visit. It would be nice to have some guidance for Italian dining newbies such as myself on what certain things listed actually are. I was more than a little shocked to see a large pasty coming my way after ordering what I thought was a spicy meat pizza, but there can be no denying that the calzone carne piccante was a pleasant surprise and possibly all the more nicer for it. My recommended dish however is the rustica mare e monti, a pizza that impresses both with its size and taste. One half a refreshingly cool landscape of tender king prawns, mozzarella, courgette and crème fraiche; the other a sensational affair of spicy sausage, tomato, hot chillies and rocket. At last I had successfully ordered a pizza, and what a monster of a pizza it was, almost taking me aback as much as the previous two surprise orders! It was a perfect combination. When the heat of the chillies roared a little too hot for my liking I could switch to the cool tang of freshly squeezed lemon over prawns and crème fraiche.

If you’re looking for a classy dinner out that delivers on quality of food, value for money and great hospitality then the Zizzi Ristorante is a great place to go. Whether you’re a young couple seeking a romantic meal with a sea view by candlelight or a family taking a break from the home kitchen, you will not be disappointed. If it’s something new to tantalise your taste buds that you’re after and you’re anything like me, fear not as the menu offers plenty more than just margherita and spag bol! 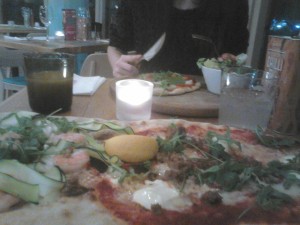 It was a bitterly cold Friday night in Falmouth, but the weather didn’t deter a healthy turnout at the Pavilions to see acclaimed blues guitarist Aynsley Lister. Lister has been touring prolifically since the release of Equilibrium (2009) and the tightness of his band’s performance is unmistakable. His more recent live session release Tower Sessions is a testament to the current high calibre shows that contains some new material and a long awaited recorded cover of Prince’s ‘Purple Rain’.

Support came from currently unsigned Rude Tiger, a hard rock power trio from Devon. Their presence was immediately stated and not due to their work onstage. The merch stall was all theirs, and what a stall it was! An excess of t-shirts, CDs, badges and an extremely outgoing band rep was all a bit too much to take in with no Aynsley Lister material in sight. As for the musical side of things, Rude Tiger proved that they were more than just a desperate pub band looking for a break. The trio delivered a memorable thirty minutes of original material that was powerful, tight and highly enjoyable. Consistency was lost during their set, a lack of addictive crushing riffage was apparent in certain numbers. However, notable experimentation with time signatures and rhythms kept things interesting yet trying to get the audience to clap along to 6/4 amusingly didn’t get the vibe that was intended.

When Aynsley and his band took to the stage it was evident that a greater force had arrived. Opening with ‘With Me Tonight’ was a platform for Lister to show his renowned solo abilities. A mid-tempo number, the track stretched around the ten minute mark. The set could’ve sounded larger had it exploded into one of his faster tracks such as ‘Soul’ or ‘Hurricane’ given that the crowd had just been exposed to Rude Tiger’s hard hitting rock anthems. A mild complaint indeed, but the night’s set could have done with a few more of his harder hitting hard rock numbers.

We didn’t have to wait long for ‘What’s it all About’. Lister’s signature solo that has earned its place as one of the most emotive guitar solos of all time. If you haven’t heard it already, imagine something in the vein of Pink Floyd’s ‘Comfortably Numb’ and Fleetwood Mac’s ‘I’m So Afraid’. The power of that one track was the highlight of the evening and in a way it was a pity that it came so early in the set.

There were moments of amusement early on as plaster began to fall from the ceiling directly above where Lister was standing. It seemed that even inside the shelter of the Pavilions, there was no getting away from something that looked like snow. Thankfully the ceiling didn’t collapse and Lister completed another inspiring performance. The encore of Deep Purple’s ‘Hush’ fused with Stevie Wonder’s ‘Superstition’ ignited the audience one last time and Lister’s connection with his fans was as strong as his stage presence and charisma. The Aynsley Lister Band have played Cornwall regularly in recent years and his following in the area has steadily grown. Throughout the show audience members were singing along to every song and his loyalty to the area has clearly paid off. However, the tour schedule may show that they won’t be coming back this way for a while yet. So for now, pick up a copy of Tower Sessions and expose yourself to the magic of Aynsley Lister live!