Posted on September 27, 2011 by Daniel Aston
Comments off 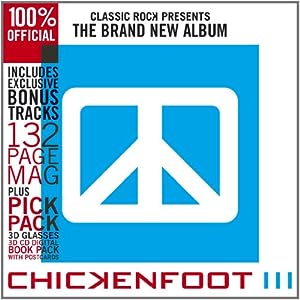 The lively supergroup returns with their bizarrely titled second album. The version reviewed here is the Classic Rock Collector’s fan pack which includes two bonus live tracks and a host of exclusive goodies. The bulk of the extra items is the 132-page glossy magazine. Inside you will find lots of interesting articles including in-depth interviews, a track by track guide, details on the new live drummer and features on Satriani and Hagar’s respective solo careers (although disappointingly dodging out the Montrose albums). The presentation is clear and it’s a real delight to behold. A great deal of 3D imagery is used inside the mag and also on the four postcards inside the album packaging with 3D glasses included. The cards also include amusing interviews with the band members and bar codes that allow bonus video content to be accessed when scanned by a smart-phone. The icing on the cake is an official guitar pick pack for all those aspiring Satriani shredders out there.

So far so good, now down to the quality of the album itself. The band have deceivingly dodged the ‘difficult second album’ in name, but thankfully they have also produced a solid album that completes the illusion. This is after all not a strenuous second offering and if anything cements the band’s reputation as a strong creative unit. Egos still tamed, Chickenfoot III is the sound of a band growing musically – not a group of rock gods trying to outplay each other.

Last Temptation is a strong opening number and is as impressive as the material on their debut. The band’s bluesy roots are again in full swing with catchy chorus lines being pumped into every anthem giving this album plenty of replay value. The memorable funky riffs that spawned all over the previous release are present here in numbers such as Up Next and Big Foot. The softer songs are just as strong with the likes of Different Devil and Come Closer showing that the band can do more than just party with Hagar’s vocals being suitably versatile. Three and a Half Letters sees the band produce a fiery and rebellious monster. Tales too familiar of individuals struggling to find work in an unfair world are represented with class and passion accompanied by the explosive musical performances of the band.

Satriani’s guitar solos are as well-crafted and just as tasteful as before. Sure he’s known as a shred master, but his melodic lines in songs such as Alright Alright and Something Going Wrong are both technical and musical to a high standard, showing professional restrain when needed.

The new album is a good listen and is destined to please fans that have already lapped up their debut album and energetic live DVD Get Your Buzz On. Two tracks from that video make up the bonus live tracks in this package. Lengthy versions of Down the Drain and Oh Yeah sound not only as crystal clear as the record production-wise, but they also sound better than the majority of the new material. There are occasional shades of mediocrity in the likes of Lighten Up and Dubai Blues which fail to muster up memorable qualities and the overall feel of the album isn’t quite as great as their first effort. There’s plenty to enjoy here and the extras in the Collector’s Pack make this particular version an essential purchase this year.